The Transition Method is the methodology that ClimateOS is built around. It explains how the different steps you are undertaking in ClimateOS are connected to each other in a logical and coherent system of thought (Fig. 1). 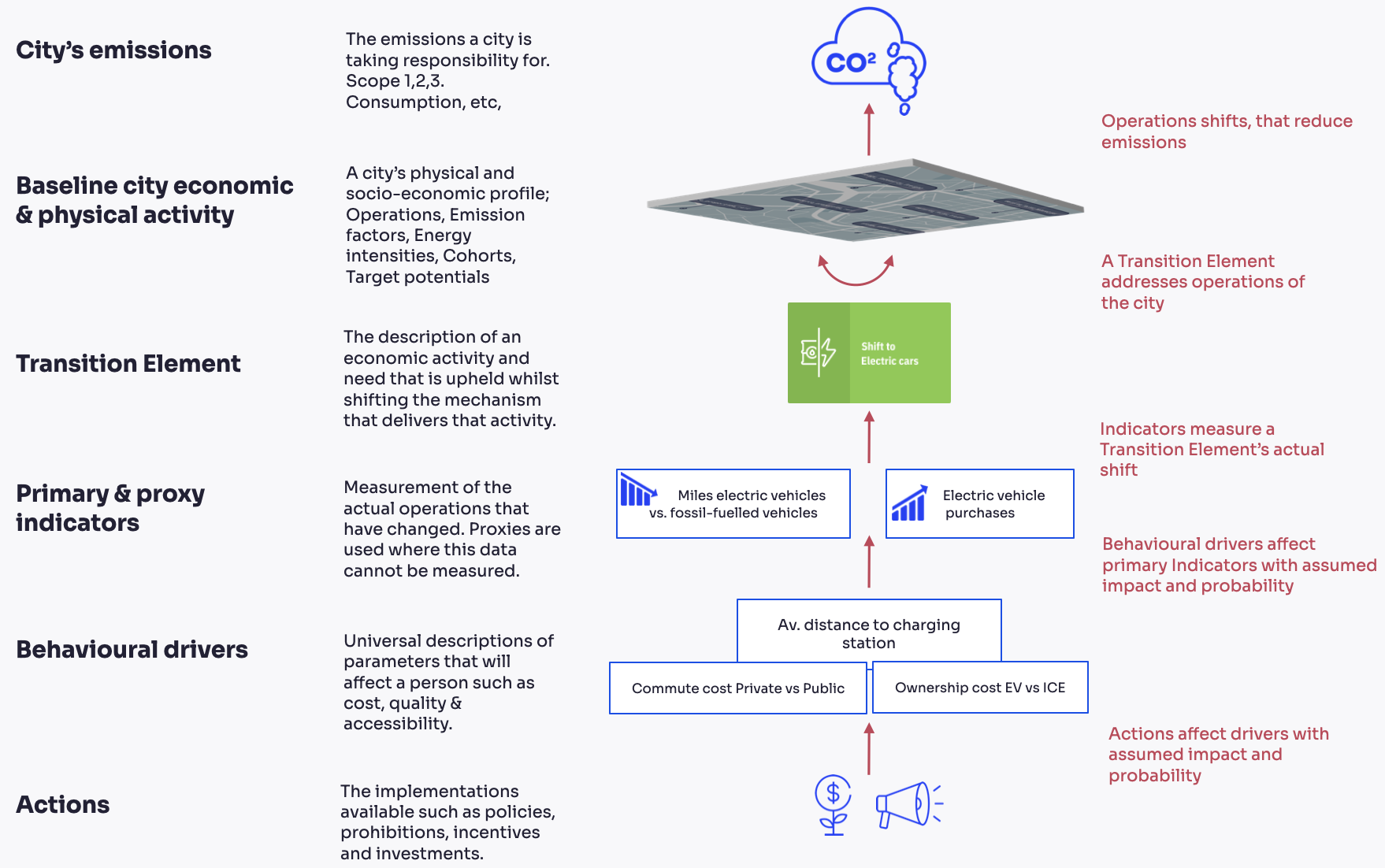 
ClimateOS begins by calculating the city’s emissions bottom-up from its activities. Through the dynamic selection of Transition elements and inputting their attached data in ClimateOS, a municipality can decide which emissions it wants to take responsibility for in its Transition - direct emissions, indirect or going beyond for all activities induced by the city, regardless of where they occur; for example consumption of goods produced outside the city’s boundaries. The Carbon Causal Chains (CCCs) provide the opportunity for municipalities to create their own unique activities profiles, by giving them control over the data and therefore their emissions.

Once the decision has been made upon which scope and sources of emissions the municipality wants to take responsibility for in their Transition plans, they then need to establish where those emissions are coming from, and why, in order to begin to shift them. In ClimateOS we define the source of emissions as the physical and socioeconomic activities that are being carried out in the city to maintain the status quo, i.e. transporting people from A to B or heating a building. All of these activities influence the amount of emissions in one way or another. The amount of emissions per activity can be described as a standard combination of unique parameters which are physical operations (km travelled, m2 heated etc.), emission factors, energy intensities (amount of energy needed to carry out one unit of work), cohorts (average commuting distance and target potentials). Once all of the greenhouse-gas-emitting activities are defined, we’ve established where the total emissions in a municipality are coming from, and understand why, and can start planning the shift to lower-emitting alternatives.

Each Transition element is

Each Transition elements comes with primary and proxy-indicators, the measurement of the actual operations that have changed from a high-carbon to a low-carbon mechanism.  i.e. the amount of ICE cars shifted to electric cars. Proxy indicators are used where primary indicators are not accessible, for example when the amount of kilometres driven by electric vehicles can’t be attained, registration numbers of electric vehicles can help estimate the shift. These indicators are individual to every Transition element, and are the means used to measure progress for each and every transition.

Having defined those primary and proxy indicators we can have a look at how we can influence them. In order to do so, we’re making use of behavioural drivers. These are universal descriptions of parameters that will affect a person in their decision-taking. These can be but are not limited to costs, quality and accessibility. The decision of people buying, or using, an electric car are dependent on several of these factors. The costs of buying an electric car (costs), maintenance (costs and quality) and the amount and density of charging infrastructure (accessibility). Once we’ve defined the behavioural drivers for each transition, we can plan our actions accordingly.

By defining our actions on the basis of behavioural drivers that have an influence on the primary and proxy indicators that are attached to the Transition elements, we have the ability to develop goal-oriented and impactful actions.